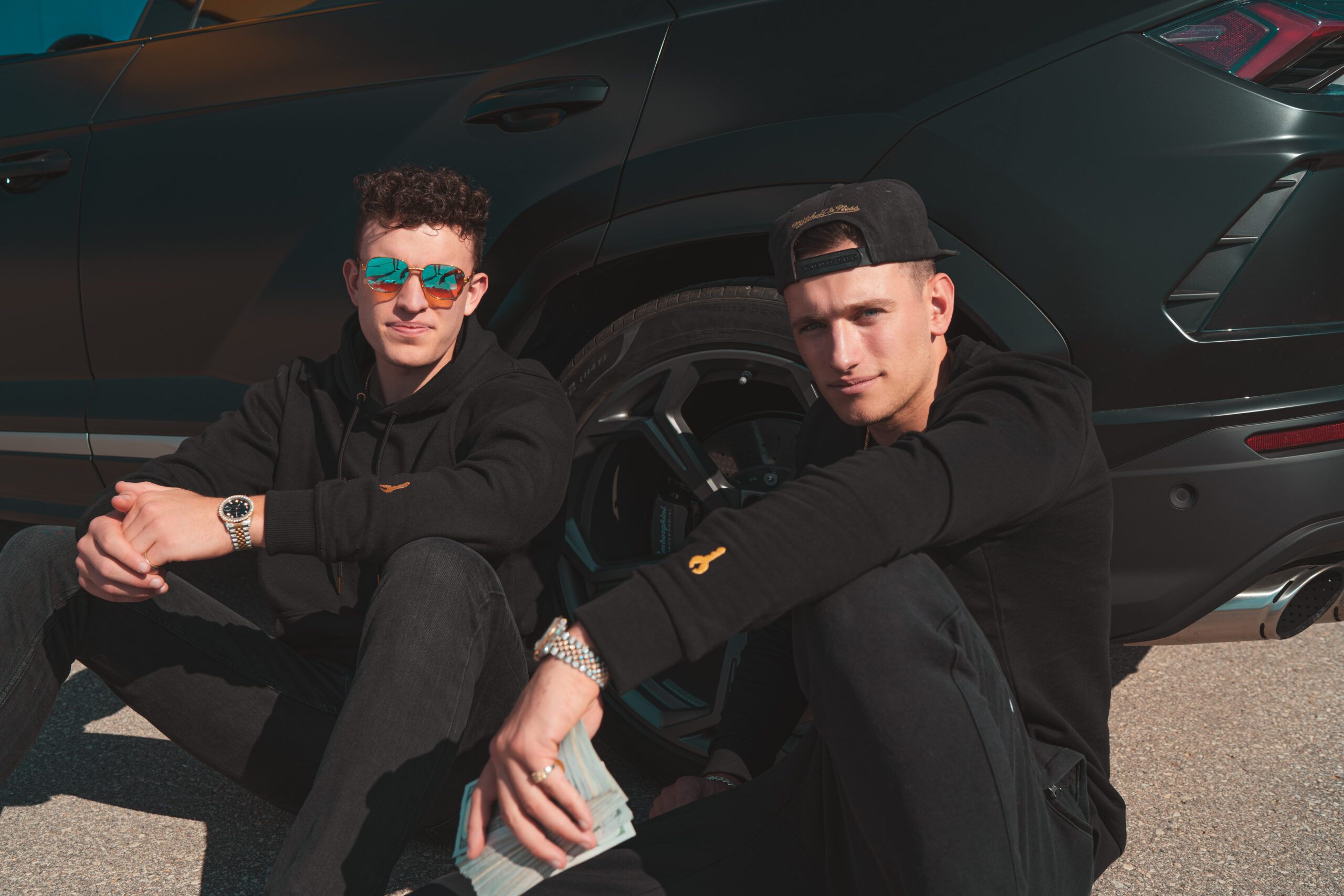 And before promoting celebrities like Kevin Hart, Snoop Dogg, Rick Ross and tapping into elite networks…

For Highkey Enterprises – the number one loop giveaway agency – it started during the school years.

Luke Lintz began his first business venture during his sophomore year in high school along with his older brother and business partner, Jordan Lintz.

Just like any great Entrepreneur who starts their journey…

They saw a problem that no one else was trying to solve and they took advantage of that opportunity.

Their schoolmates were frustrated over their corded earbuds.

Selling futuristic tech and best of all, completely wireless earbuds.

After looking at samples of the product, they invested $8000 of their own money into HighKey’s 1.0 wireless earbuds.

Their strategy was simple.

They ran meme page ads for the product.

That was also when they talked to Joey Hickson –Top Entrepreneur Under 40 Social Media Producer – since he had a meme page as well.

They went behind the camera for the first time and integrated themselves into the video content with these wireless earbuds.

“I was looking back, and they were very cringy but we still got a lot of views”.

They found their ideal target audience – kids in high school and university.

And the brothers knew how to relate to them.

They made comedic school skits and posted them on the meme pages.

And then bought out a ton of meme pages.

Content that went “super-viral” would be used on other pages to force more virality.

From there, It didn’t take long for them to branch out to their second business – “Highkey Agency Inc”…

Where they took over the social media management of other companies.

It is here that the seeds for what would become the number loop agency for celebrities and influencers began to really grow and expand.

For Luke and Jordan, their very first entry into the loop giveaway space was at the end of 2019.

Also known in the meme culture as the “catch me outside, how about that?” internet personality.

Here’s how they got connected to her.

Luke went to a booking agent info website where you can find celebrity email addresses.

They sent out cold emails to many of the celebrity contacts that they found.

And they didn’t just send it one email before giving up.

Eventually, her manager got the word and from there they got connected with Bhad Bhabie.

It sounds too simple but this cold email strategy was how the brothers built up a ton of big-name connections.

Word of mouth is the most basic but the most powerful tool in marketing and getting your foot in the door.

As long as you’re great at what you do, you produce results and you’re proactively reaching out and putting yourself out there…

Word will spread about you.

And next thing you know, key contacts may call you up, changing the trajectory of your entire career and business forever.

From there, things only went up for the brothers.

And it didn’t take long before they were working with the likes of Kevin Hart, Bella Thorne, Rick Ross and Snoop Dogg…

Doing viral giveaways for them.

Giveaways are the number one way to give value to an audience.

From there, it’s much easier to subtly promote your company and your service without coming off as “salesy”.

When you do a loop giveaway, everybody wins.

Highkey wins because they get to host the giveaway competition which is great for brand building.

The Influencers they work with win because they get to expand their reach even more.

The followers win because they get the chance to win a giveaway.

Doing over #1 Million on Bitclout

Aside from doing promos and giveaways with big-name celebrities…

Jordan and Luke Lintz had made over $1 Million on Bitclout which is the world’s first crypto social network.

But by the end of the year, it’s projected to have 10 million users and the value of each coin to be $2.5K.

Jordan got consumed by the Bitcoin space after realizing just how “garbage” fiat currency is.

Especially with the trillions of dollars that the government is printing.

So he moved all the cash from fiat to bitcoin when bitcoin was sub 20k in 2020.

Luke would go downstairs to work and Jordan would be on his phone the whole day with bitcoin videos playing in the background.

Now though, Bitclout has taken all his attention.

It allows users to bet on the popularity of public figures by buying tokens associated with people’s profiles.

Example: Justin Bieber can have his own token.

When Bitclout is still here in 5 years, it’s going to be more refined.

And with the success they’ve seen so far, they’ve decided that whatever they do, is going to be fully represented on Bitclout.

When Bitclout blows up, they’re going to do specific influencer/celebrity campaigns on it.

They’re planning to do giveaways on Bitclout and then offer it to Instagram.

If trends go upwards in 5 years, it may reach a billion-dollar market cap.

“We went all-in on the idea that no matter what we do in the long term, 100%, we’re going to be staying true to doing giveaways.

We’re always going to be giving away.

It’s the number one way to give value to the audience where you can sneak in things about your company or service. You’re giving value upfront”

The Untapped Market For Giveaways

But we had a discussion on whether they would do it for the education industry.

Now, they mainly target rappers because they have much more of an influence over the culture.

The education and coaching space doesn’t have as much virality as the mainstream celebrities, models and rappers.

Rappers in particular are so electric.

They have an electric following and they’re the ones who craft culture.

“Instagram by nature is a younger platform for a younger audience in general so their engagements are insane”.

However, for the right person, there may be a huge untapped opportunity to do giveaways for big names in the education and online coaching space

Go to any personal development section of the bookstore and you’ll find loads of books telling you that you should sleep early and wake up early in the morning.

But for Luke and Jordan, their routines don’t fit the mainstream view of what a routine should look like.

For instance, the first thing they do is check their phone in the morning to look at notifications and messages they’ve missed.

Everyone may say not to do that but for these guys, it’s what works for them.

They used to have a routine where they journaled, set weekly and even daily goals.

But ever since moving to the colourful landscape of Puerto Rico, they’ve since been “going with the flow”.

And they’ve set their businesses up to allow them to do that.

A business that consists of:

“When I wake up, I’m happy that I don’t have to set an alarm…I want the freedom to stay up a bit later or sleep in”.

As Gary Vee says, “it’s not the time you wake up, it’s what you do while you’re awake”.

Because even if you’re the most efficient person, you’d still just be saving 2 hours by going to sleep earlier…

Which is not that much in the grand scheme of things.

I always say to find your “sweet time”.

I can wake up at 4:35 am because I operate the best in the mornings.

My business partner, Ray Pang, on the other hand, sleeps late and wakes up at 10 am.

When I talk to him in the morning, he’s really drowsy.

But come night time, he becomes a nonstop machine.

In the end, everyone is different.

So no matter what people try to tell you to do…

If something is working, just keep doing it.

So find what works for you and run with it.

The best time to take risks: What they would tell their younger self

The one piece of advice they would give their younger self would be to get on social media sooner.

They had only started 6 years ago.

They started their e-commerce business at 16 and they only started it from a business standpoint, never from a consumer standpoint.

They never looked at social media like the average person does where they just scroll through without any purpose or monetary value.

Even to this day they only use social media for business-related stuff.

One thing to note is that these guys did not have the fear of failure.

They weren’t paralyzed by it.

They failed a ton. There were depressing times. But they made it through.

“I keep telling myself, this is like my tuition. Instead of going into university, I’m just practising business and I could legitimately fail for the next 6 years.

As long as you go all-in when you’re young, that’s the worst-case scenario. Miserably failing, going bankrupt and restarting”.

They had gone into debt but they made it out of it.

They made their biggest failure while they were still living with their dad.

When the time came to live in their own place, things got better and better.

I’ve spoken to a lot of young guys who are like “what do I do?”

Because it’s much easier to go all-in and fail when you have that safety net.

If you don’t then you may never do it.

By the time you’re 40 and you have kids, then you may not take that high risk anymore.

Your 20s is the best time for you to take the biggest risks that you can take.

When you get older with your family, your risk levels go lower.

These guys threw $700,000 into Bitclout and would only know the results in 3 days. Even if they’re millionaires, that’s still a considerable amount of money for them to lose.

They’ve also developed so many relationships just from Bitclout.

So even if they fail at it…

It still would’ve been a good tradeoff just from the relationships they forge alone.