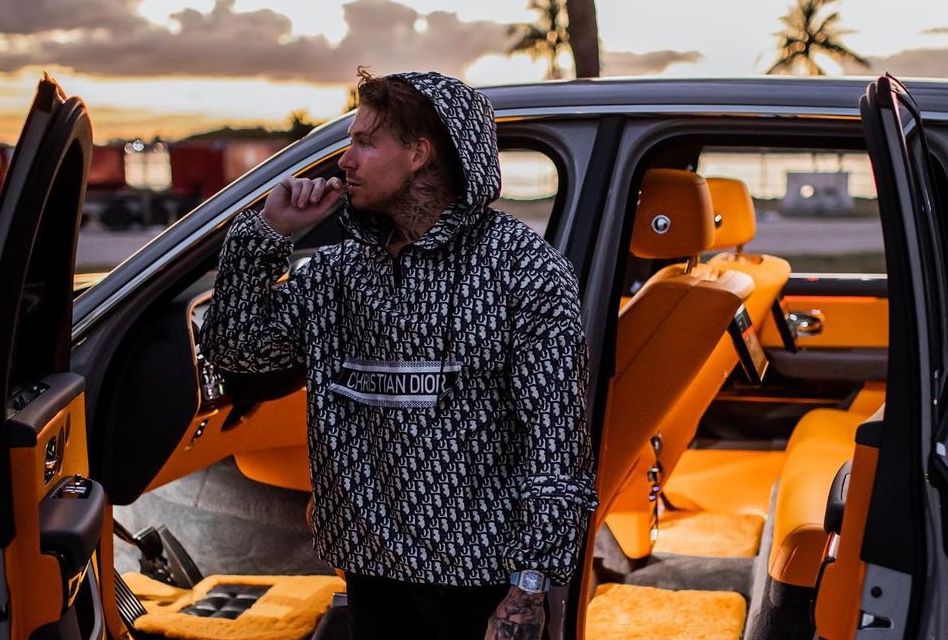 Many successful young wealthy millionaires have started out from such humble beginnings.

The hardships that Branden had faced early on created a strong work ethic within him that not a lot of people have.

Branden was determined to create a better future for the family.

At age 16, he took up a job as a dishwasher. By age 21, he was cleaning yachts for the wealthy.

Inspired by the lives of these wealthy people, Branden wanted to create a lifestyle like that for himself too.

Years later, he became a multi-millionaire with now over 1M in his Instagram following…

Now having the freedom to take luxurious holidays on the regular.

Read on to find out see the top insights he had discovered during his journey.

Hanging out with the wealthy

“Just going out there, making connections, learning from people, getting around the right people and taking risks is really what changed my life”.

The best thing to do is to get around the right people.

Branden recalled being a bartender, witnessing these rich kids driving the Lamborghinis, popping bottles with beautiful girls by their sides and at the time, he didn’t have any of that.

“I was like, man, how do I pop those bottles? how do I drive those cars? I gotta get around and ask the right questions”.

From there, he decided that he needed to connect with those kinds of people.

He reached out to a couple of wealthy entrepreneurs he was following who were living the lifestyle he wanted.

They invited him over to visit them.

As soon as he was in their vicinity, Branden was entranced with what he saw…

The cars, the money, the success…he wanted to be in their shoes.

He was so inspired in fact, that he took the risk to quit his job and drive across the country just so he could start a new marketing company with them.

They became his mentors and his success only skyrocketed from there.

“The people who are successful, the ones who have blue checkmarks, have millions of dollars…they’re humans just like you and they’re no different. They just got around the right people and took the risks”.

The problem is that many people get into a rut of just hanging out with the same kinds of people and never pushing themselves out of their immediate social circles.

“I go on Facebook and check up with my family. I see everyone I went to high school with and that I worked with…everyone is fat and ugly and have miserable families, it sounds so fucked up to say. But it’s the truth. For me, I would rather die than be average”.

“Everything in life is a sale”

Here’s a question for you – how would you run a t-shirt company?

It sounds like a legitimate thing to prioritize, but here’s the problem.

Let’s say you make an order to a Chinese supplier but they stop manufacturing because of Covid.

The product you ordered doesn’t come in time.

Your t-shirt company can always run the risk of shutting down.

But you know what kind of business will never shut down?

It’s the business of growing your PERSONAL BRAND!

This is why Branden had prioritized building his Instagram and online presence for years.

It’s so hard to say. Just know that you need to do it. It’s the best investment…when you meet someone and start a million-dollar business, what’s the ROI on that?…

I could lose everything right now…but I can go make another t-shirt company, make hundreds of thousands a month and I’ll be fine”.

So many people start a business without first prioritizing the personal brand.

You could literally just make one story post on Instagram and immediately, thousands of people will want to buy from you instantly.

That’s the power of a well-established personal brand.

As Branden said, “everything in life is a sale”.

It’s like talking to an attractive girl or guy in the club and you sell yourself on why they should go home with you.

Or you go to Macdonalds and they upsell you on fries.

The power of vision for becoming wealthy

Having a vision is the most powerful ability we have as humans to create the wealthy reality that we want.

Ever since Branden became inspired by the lifestyles of the wealthy…

He would reflect and envision himself living that lifestyle everyday.

“I would go to sleep at night and in my dreams, I would know what it feels like to have Lil Baby or Drake playing with the top off, grabbing the steering wheel with the wind blowing in my face, going down Miami and there are yachts next to me”.

Branden believes in acting as if you are already a millionaire even when you’re not yet.

Whether it’s walking like one, dressing like one, smelling like one, or even just visiting high-end hotels, restaurants and taking it in…even if you don’t have the money for it.

It could be just as simple as smelling the leather of a Ferrari.

Doing things like this makes the dream much more vivid and tangible.

Even when he was a bartender, he would find ways to act as if he was already a millionaire.

“People thought I was a dick for it”.

Everything he had today, the cars, the lifestyle, the luxurious travels, he had envisioned all of it from the start.

Even today, he would go to the steamers everyday and do “a lot of thinking, envisioning, talking to God, talking about goals”.

That is the power of having a vision and reflecting upon it everyday.

Planning vs “going with the flow”

Some people like to plan their way to success.

Others prefer to just go with the flow but always have that vision with them as a roadmap.

Branden prefers to go with the flow.

He would make big purchases at times without planning for it.

“So many people like to plan but you’re either a planner or a doer. Nothing in life is perfect.

The ones who go, go, go are not scared to fail and they are the ones who succeed.

I’m not the smartest person at all…but I dropped everything I had, packed up my Jeep Wrangler, drove across the country to take a risk and that’s why I’m more successful than a lot more people cause I’m not scared.

I’ll risk every single one of my cars, my house, my money…and I’d do it again because my mindset is so strong that I’ll make it right back”

Protecting your energy and money

On your path to success, you will get to a certain level where you have to really protect your energy and money from all sorts of people…

Who decides to scheme and take from you however they can.

In China, for instance, there are stories of random strangers purposely running themselves over onto someone’s car…

And then attempting to sue them for all that they have.

“You’re gonna spend 90% of your day just protecting your money.

I gotta protect myself. Protect everything that I’ve worked so hard for and all the risks that I take because, one mistake and it could all be gone like that”

You also gotta save for a rainy day because unexpected fallouts happen all the time.

“Let’s say you’re at the gym right now and you break your arm then boom, you’re out of work.

You got a medical bill because you didn’t plan and you’re not on health insurance.

Rub shoulders with those who are wealthy

“I love mentoring people…I’ve probably made one person a millionaire by now and I’ve made 20 people at least multiple 6 figures. It’s a cool feeling”.

When Branden is mentoring students, he focuses on helping them establish their personal brand…

As it is the fastest easiest, most secure way to make cash.

From there, your personal brand will allow you to brand out into whatever business you want to create…

Whether it’s an agency or an ecom store.

His personal brand also allowed him to branch out into mentoring students to succeed just like him.

People saw the success he had and they reached out to him for advice.

At that point, all he had to do was give them what they wanted and they would pay top dollar for his mentorship.

On that, make sure to follow Branden  and DM him if you wish to find out how you can be mentored to make your first million.

Email [email protected] if you like to be interviewed for MillMentor.