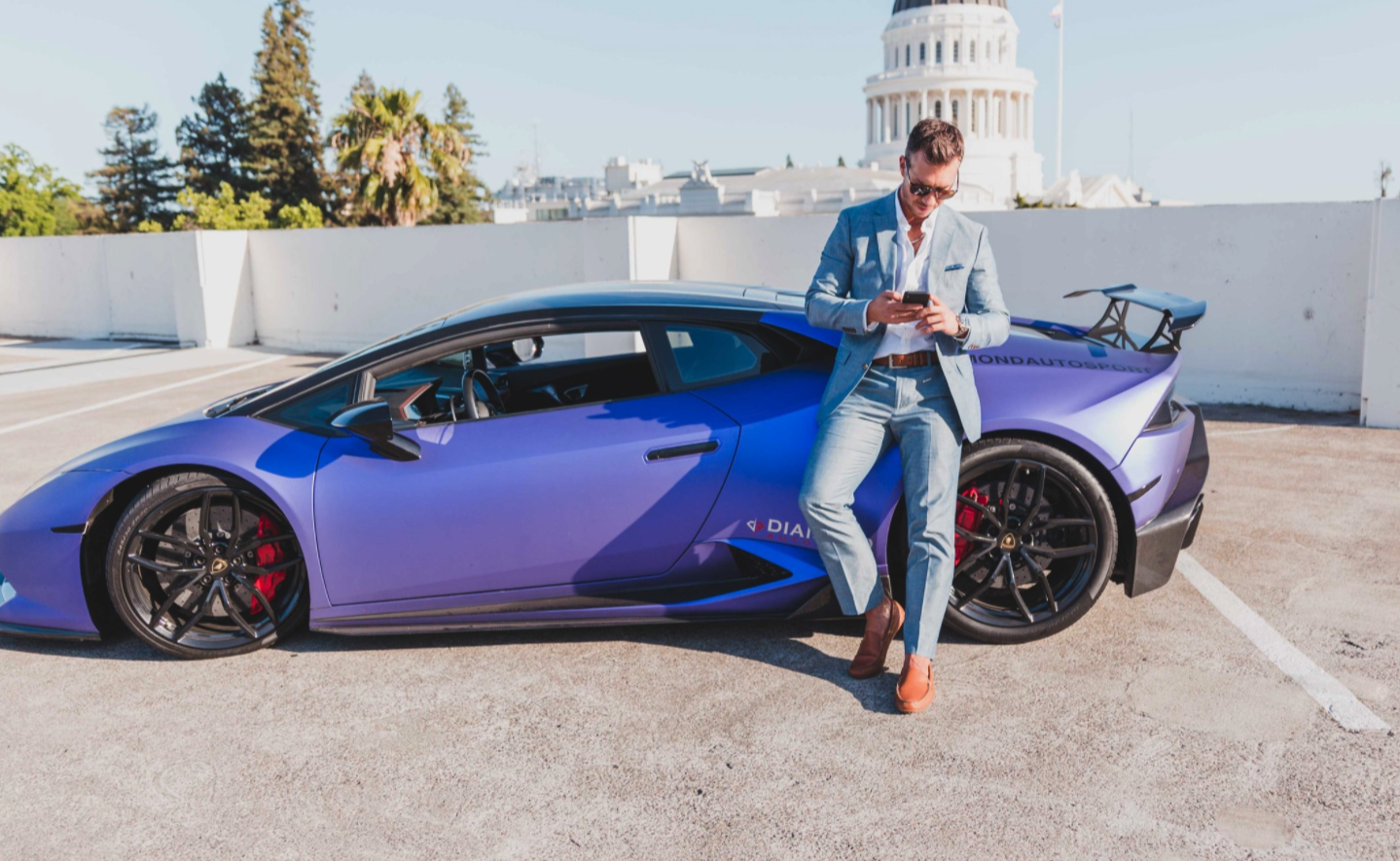 It’s no secret that personal branding and building social media presence have become the dominant force for businesses to succeed today.

I, myself, did a video one day on my IG and that one video landed me 10 new clients (just like that).

That’s how much of a dominant force personal branding has become for social media.

I’ve only met a few people who are actually top players in the world of social media.

And I’ve had the pleasure of interviewing one of those rare few who have been dominating the social media game.

He is none other than Joey Hickson.

The man who built up 5 million followers on Vine (before it got shut down).

The man who also built up multiple accounts on Instagram with millions of followers.

And a music page that played a pivotal role in launching the career of Shawn Mendes and some of the biggest artists in the world.

Had become a top player in the social media game (building multiple accounts from scratch all the way past the million followers mark).

From Having No Dream To Building Social Media Presence (w/Celebrities)

From his early days, Joey was just a normal kid who lived in California with a dream and no experience.

But he did have one thing going for him…A drive and a heart to turn himself from nothing into something.

He was not going to find that in the school system, however.

Joey had struggled with ADHD during his school years.

He struggled to focus anytime the teachers gave their lessons.

So when Joey was 16, he didn’t drop out of school entirely…

But he took “independent studies” where he went to school just one day a week just to take the test and credentials.

For the other 5 days, he just worked.

Joey started off managing health clubs for 15 years (from 18yos to mid-20s).

At first, it was fun to work at.

However, the gruelling 12+ hour days (starting from 4-5am in the mornings) started to take a toll on him.

At the end of the workday, he would come home, super tired.

He knew it wasn’t sustainable for him with his burnouts.

He was ready for something new.

One day, he signed up a gentleman who worked out at the best hours (think Monday 1pm).

Joey asked him, “what do you do for a living?”

He said, “I sell software”.

And he sold an online meeting software called Good Meeting where you could connect via video chat with someone from one computer to another.

Back when people needed to be educated on what an online meeting even was.

So wanting to do something new, Joey started working for Citrix for the next 5 years.

As he was working in Citrix…

He started to develop his love for social media, connecting and sharing the experience and journey.

He had built up his Vine account to 5 million followers (before they shut the platform down).

Which led to people with big accounts on IG, hitting him up wanting to collaborate to grow each other’s account on IG.

At first, Joey said no because he was going all-in on Vine.

So he made the transition to IG (just before the Vine shutdown).

And he was able to grow that on Vine.

Once Vine died, he grew a big network of people with high followers ($500K – $1 million+) which was considered really back then.

At the time, these were really big numbers.

Once someone promoted Joey, his post would go on the explore page and go super-viral from there.

“Tens of thousands of people were following me a day”.

One of the big accounts he created was a funny page called “lmao” and it was the very first meme page on IG.

This was back when they weren’t called “memes” but they were just called “funny, humour content”.

He posted pictures and videos with captions for people to have a laugh.

Another big page he created was a music page called “singers”.

Joey was passionate about music at the time and there were no music pages yet.

So he took that as an opportunity to create a page for music content but to also connect with music artists.

“Singers” became one of the largest music pages on Instagram (now with 5.3 million followers)

And before he knew it, big record labels like Capital Records and Universal Entertainment reached out to Joey to give shoutouts to their artist when they debut their albums.

Some of the biggest artists were nobody at the time but they became famous because of this page.

One of those big-name artists today was Shawn Mendes.

When Joey shouted him out on his page, it propelled his career to the top charts…

Essentially “putting a thumbprint” into the explosive growth of many of these artists.

And the last Instagram page he created was “random videos”…

This page built up a total of 30 million followers. He sold paintings

When Joey received countless DMs and emails asking for shoutouts…

He discovered for the first time that he could make money from his Instagram pages.

He started with $50/hour. Then as his followers increased, so did his rates.

As the money came in, his IG accounts started to become a legitimate career path rather than just a hobby.

But his career transition was not met without resistance.

And on top of that, he was married.

The thought of not being able to support his loved ones was a barrier.

He had quit his job to start his own company.

This is something that many aspiring entrepreneurs dream of doing eventually.

And he said that “the hardest part is just doing it. Go both feet. Jump in”.

With that, despite the mental barriers…

When Joey’s IG accounts made more money than his job, he jumped into the IG game with both feet.

After he quit, he had given himself the space to give 100% of his energy to his dream.

And he “doubled his income, went full force and never looked back”.

“The rest was history. It’s been a fun, amazing journey since”.

It’s important that you don’t just quit your job right away.

You keep working that job of yours while you build your dream as a side hustle (even if you have to work at night).

Joel Brown, the Founder of the #1 motivational website in the world, Addicted2Success (A2S)…

Quit his snake-handling job when A2S had matched 70% of his job income.

From there, he was able to go ALL-IN on A2S without worrying about the bills or putting food on the table.

And it allowed him to have the space to double his income much faster.

Gary Vaynerchuck talks about being on multiple platforms.

Because if one crashes (like Vine did), at least you have other platforms you can lean on.

Joey became involved with platforms like Clubhouse and Bitclout as an early adopter (like how he had jumped into the early days of Vine and IG).

He has since grown a following on this platform too.

“A lot of my businesses come from Clubhouse”.

Joey speaks as a panelist.

And as he talks, his phone would buzz with notifications of messages from people saying, “Hey, I want to work with you”.

All he needs to do then is just send them a proposal and “next thing you know, I’ve got a new client”.

Since December, he had already hit 6-FIGURES doing this with Clubhouse.

What’s important is that Joey initially went to Clubhouse not to make money, but to give value.

Clubhouse today is going up and down in demand.

And people who are actual experts in what they teach.

But the platform is “showing who’s the real deal and who’s not”.

One to help grow accounts for clients.

One for managing engagement pods (a group of Instagram users banding together to help increase each other’s content engagement).

One to help clients get verified on all platforms.

And he also has different teams for different platforms.

Building his business to this level did not come overnight.

Especially when you know how to do it right, regardless of what platform you’re in.

This is why Joey is releasing his new IG course (which will be coming out soon?). <ask Wade>

<Joey is releasing his ebook right now which is 100 pages of no fluff, no bs wisdom about everything he knows about IG.

There are about 10 years of wisdom breaking down everything…

So that even someone who just started using Instagram can immediately seem like they’ve got years of experience on growing viral pages.

He is also releasing his IG masterclass <ask wade what it’s called or find out yourself?>

Advice Joey Would Give To His 16-Year-Old Self

Over the past 23 years, Joey had seen the changes and disruptions taking place in social media.

It would be to be creative, explore more options and see if he can solve a problem and build something out of that.

These companies – Uber, Amazon, Airbnb – all had one thing in common.

They didn’t start out owning cars, hotels, or physical stores.

Even Crypto has become a phenomenon and it doesn’t own banks.

You can get RICH just by making life simpler.

It’s also not who is first to market…

But who is the first to innovate?

“Vine could’ve been something big but they weren’t innovative enough. They didn’t monetize. It was in and out. I got my 5 million followers then they shut it down and it was gone. They sold it to Twitter and Twitter just said, “turn off the lights”

The Best Muscle You Can Ever Work On

What is the best muscle you can work on when running a business?

Is it the biceps, triceps, glutes?

Well, it’s not anyone of those nor is it any of the muscles you have on your body.

The best muscle you can work on is your mind.

“My 95-year-old grandma is still alive and kicking because she never stopped training her mind. She’s always been alert”.

Bob Proctor, one of Joey’s mentors, says to never turn off your mind.

But is still running an internationally recognized self-development company.

Joey makes sure to train his mind, body, and soul with his daily routine…

Having a routine like this keeps your energy high so you can work on your passions.

“Find something you love, focus on it and turn it into something better”.

And it doesn’t matter how old you are.

“I have friends in their mid-40s, starting over and now actually being successful”.

All you gotta have is passion, drive and heart, and you will have an exciting future.