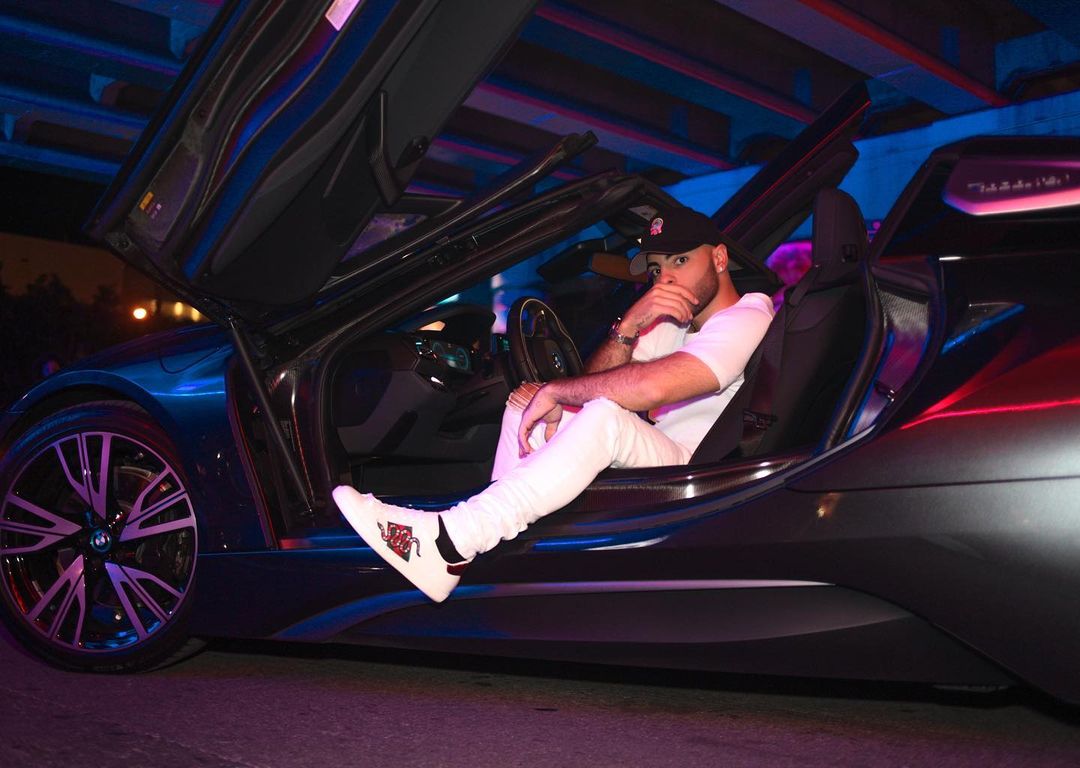 The 6 Steps To A Millionaire Network By Age 27.

You’ve never thought that a broke college student, who didn’t learn anything in school…

Would grow to build a Millionaire network by age 27 and become the founder of multiple million-dollar software companies.

But that’s the story of Roy Taylor, the Founder of Miami Labs, an internationally recognized iOS app and software firm. He is also the creator of the Millionaire Mentorship app.

Read on to know the 6 exact steps that Roy took to go from a college student, down on his luck…

To having access to the world’s millionaires, billionaires, celebrities & influencers by age 27.

From Broke College Student to Clearing out a Million-Dollars

Being an Israeli kid moving to Miami without knowing English can make you feel like an outsider to the American culture.

And being a creative, restless kid in school made Roy Taylor feel like an outsider to the school system.

But his childhood had made him realize the truth about himself: that he was made to be different.

During his school years, he was never considered a “good student”.

He saw his parent’s wealth and he knew he wanted better for himself.

It was this mindset that shaped him to dream big and become successful.

But schools did not help him get any closer to his image of success.

They didn’t teach him anything about building a business, making money, or even filing his taxes.

And even getting a business admin and marketing degree from the prestigious school of Santa Barbara, UCSB, did not do anything for his journey.

“It was literally a joke…a scam”

Despite that, he didn’t allow his college years to go to waste.

While he was a broke college student…

He had learned how to code by himself.

He then built his own software company – his first SAAS – Instafame.

“I made a couple hundred thousand dollars out of the gate, the first year. Second-year cleared over a million dollars…That’s when the big IG marketing boom started…I was there when the great digital entrepreneur boom happened”.

In 2020, he created the world-renowned Millionaire Mentorship app…

As he was scrolling the internet and saving videos for self-development content, one thing kept troubling his mind…

“All these videos that I spent late nights researching and finding over the last years. I wish I could just get them on-demand on my phone without them taking up all this space, searching really hard for it or pulling it up from my hard drive”.

And reorganize it into categories and levels.

He curated about 50-60 videos in each category and it turned into his “mentality playlist” for foundational entrepreneurial content.

As soon as he shared it around, people were raving about it, giving him feedback and encouraging him to turn it into a brand.

That was when he knew had something special in his hands.

So from January 2020 to March 2020, Roy had built the whole branding and expanded the whole platform.

When he launched it in March, it brought in a couple of thousand people right away.

And when he received the crazy levels of feedback, he knew that he had found his calling in life which was to help people.

“I’m so passionate about it because I wanted to solve my own problem. No one taught me wealth. My parents didn’t teach it to me. High school didn’t teach me. So I needed to do this by myself…Now, it has 10s of thousands of members in over 100 countries across the world”.

From his inspiring journey, he had picked up 6 key lessons that were PIVOTAL to his success.

Step 1) The One Universal Strategy of Millionaire Networks

When Roy started, he was out in the streets, networking, which allowed him to understand what people wanted.

What he realized was that it was all about EXCHANGE OF VALUE!

This is the one universal strategy that builds wealth and creates millionaire networks.

When he built Instafame, he found that the core need that everyone had was a sense of community.

“People realized this was a hot new network to go and network and build credibility”.

Back then, before people sold PR and IG verifications…

He saw the opportunity early on when he put himself out there on the streets, seeing how he could create EXCHANGES OF VALUE in people’s lives.

And Instafame became a million-dollar business.

So it’s all about finding the problem that people have and then solving that problem as an exchange of value.

Gone are the times where you can just hard-sell people into buying whatever it is that you have.

Today, it’s all about building relationships, value and authority with people.

“People have money to give. You don’t need to sell them on it. Just show them why they need to give you their money so you can help them”.

But before becoming a millionaire, there was a long list of failures.

Besides the multiple businesses that he started but failed…

Which also didn’t work out in the end.

“But every business failure got me closer to where I am today. Don’t shy away from failing in your business. You gotta learn the necessary lessons that you need to learn and continue making better decisions. At some point, you will hit gold”.

Step 3) The Right Mentorship is Everything

There are two different kinds of people.

The second one settles and lives in low energy. You don’t feel inspired or a sense of EXPANSIVE possibility when you’re around them.

You just feel low energy yourself.

And this is why mentors are extremely important.

On top of the wisdom, they give from the countless failures and mistakes they’ve been through…

They give you that high energy and vibration that you need to perform at your highest peak potential.

“Find someone who already has what you want, do what they do, say what they say, and you’ll get what they got”.

There’s no shortage of mentors that are out there.

But now the real question is…how do you find the RIGHT mentors?

“Great place to start is to figure out what you want to do, what industry you’re in. If you’re in some little farm town in the middle of America, it’ll be a little harder for you to move to LA, Miami, New York. Go where people are so you can get to the right people, champions, big players mingle and hang out and go ask questions. Learn from people. Have good intentions and God will do the rest”.

On top of that, strive to cultivate that high energy and vibration yourself.

“If you’re not gonna be on the top 1% of the spectrum, at least be on the top 30%. Put yourself out there, talk to people, get those opportunities”.

It’s a common misconception that there is “not enough money to go around” or “money doesn’t grow on trees”.

But these words come from people who don’t realize how much money is actually out there.

“Just in the US alone, they’re printing $1.3 Trillion Dollars every month or every quarter. They do coronavirus stimulus bills of Multi-Trillion dollars. All that money is being pumped. That’s money that never existed before and It’s being pumped into the marketplace every single month. People don’t understand there is so much wealth out there”.

It’s important to note that a million dollars is not even worth that much today.

“A Million Dollars is not even a house now. Even an okay condo is a million dollars”

Step 5) What Got You Here Won’t Get You There

Picture a thousand-piece puzzle on your desk that is worth a billion dollars when you piece it together.

In 2020, the 34th annual Forbes list of the world’s billionaires included 2095 billionaires with a total net worth of $8 Trillion.

“The problem is that even successful entrepreneurs who made a million dollars only have two pieces of the puzzle. They’re looking at the puzzle all broken up and they don’t even have the business that shows them the key of what that looks like so people are just scrambling, hustling just for 7 figures, and they don’t understand the key to making 8 figures, 9 figures, 10 figures. The world’s first Trillionaire is alive”.

Are you keeping your energy high or are you allowing it to go down?

Whether it’s listening to motivational tapes or hanging out with amazing, ambitious people…

What are you doing to keep your vibration high as an entrepreneur?

Unfortunately, for most people, personal development is not a daily habit.

So what happens is that they are inspired one day but “regress back to that lower vibration” the next day.

“Personal development is like showering. You can’t just NOT shower every day. But people don’t do this. You need that injection of motivation and positivity”

Do you let your car go empty or do you fill it up all the way?

If your car goes empty, it’s really hard to start it all over again.

And if you put bad quality fuel (hang out with negative people), then it’s not going to run as well.

But if you put good quality fuel into it…

The fuel meter will go to the top and the car will run well.

“They come on for an hour or two hours and they teach us live. I think that’s way more valuable than any other mentorship”.

The Millionaire Mentorship app has opened the door for Roy to interview and connect with top players worth hundreds of millions of dollars.

And it’s only just the start.

The education space is only going to get bigger.

“I believe over the next decade, it’ll become a multi-trillion dollar problem and industry. I want to be at the front and serve the whole wave. I know I’m going to be the next Tony Robbins, Bob Proctor. Personal development is something that will never go away. If we can make the world just a little bit better or even a lot better, then let’s do it. That’s more important to me than anything else I can do with my life”.

Get his Millionaire Mentorship app HERE